I wasn’t fortunate enough to attend this month’s Soccerex conference but from what I can gather, from the media reports and tweeting those who attended, it sounds like the game’s fling with social media is about to develop into a fully fledged love affair. Discussion about digicomms was front and centre of the conference, with Lewis Wiltshere’s 30 minute presentation about Twitter supplemented by talks from AS Roma and AC Milan about their social media success.

But what about those clubs who don’t command gates in the thousands and don’t have vast sums of cash to throw at community management? How do they use social media?

A handful non-league clubs have began to recognise the potential value of digitisation and have taken to social media with gusto. Northern League side Hebburn Town are one of these few. I spoke to Andy Hudson (@HuddoHudson), who juggles his role as Media and Communications Manager with other commitments, about what makes social media such an important part of their communications strategy, the benefits it’s brought to Hebburn Town and why other clubs need to follow suit.

AH: I’m the Media and Communications Manager so I handle all PR, ensure the website is written in the correct tone and has content delivered on time, produce the match reports, ensure there is sufficient coverage in newspapers and a huge number of other things like overseeing the re-branding of the match programme.

How long have Hebburn Town been using social media and on what platforms are the club active?

All social media use started with my arrival at the beginning of the season. The main platform we use is Twitter, however I’m alone in running that account so when I’ve been unable to attend a game then there’s been no output.

We do have a Facebook presence but at the moment that platform is very much in the background due to the benefits of using a platform where immediacy and engagement are key, such as Twitter.

What makes social media attractive to a club like Hebburn Town?

If you don’t look to the future you’ll go backwards. If clubs want to survive they have to bring supporters and sponsors into the club. Before I joined Hebburn it was so difficult to get any information out of the club and almost every club was the same, with no social media output. Many clubs have websites that are underused.

If I’m a supporter or a sponsor looking to dedicate my time to something then I have to know that the investment, whether than be emotional or financial, is of sufficient value that it will be recognised by the football club. If a club can’t be bothered to effectively organise themselves, to let me know what is happening on and off the pitch then why would I bother to invest my time, energy or money in the club? That was my attitude when I joined the club and it is one that I still hold today.

What benefits has using social media brought to the club?

The profile of the club has been given a significant boost. People in Hebburn now know that there is a football club on their doorstep and the perception that non-league equals Sunday League is being erased.

There’s still a long way to go though. The club needs to make sure that the burden of social media isn’t all on one person. We also need to explore other channels such as YouTube and Audioboo so we can provide visual and audio content in addition to the written word. We’re hoping that the media team will begin to grow, with students and those who have an interest in social media using Hebburn to gain experience. 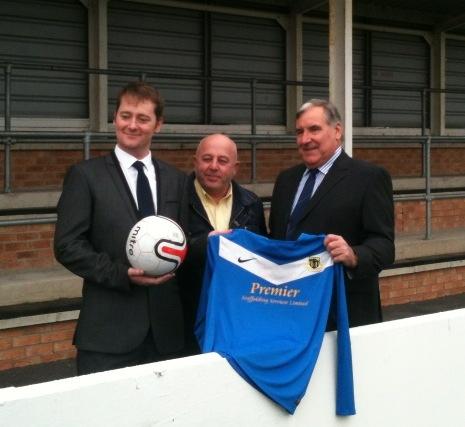 Has there been any negatives to the club’s use of social media?

Not directly, although we’ve had a few instances where supporters and even staff from rival clubs have thought it appropriate to include us in ridiculous correspondence.

We decided to implement a social media policy for players and officials after some instances where emotions were running high and comments were made that we didn’t want associated with the club but apart from that the negatives have been far outweighed by the positives.

Has social media changed the way Hebburn Town engage with supporters in the build up to and on a matchday?

When time and my availability allows then yes, significantly. When I am at games then there are updates, not just of Hebburn goals but of the opposition team’s goals – something other sides rarely do.

Having conversations with fans has led to some making more visits than usual to the Hebburn Sports Ground and in certain cases we’ve encouraged fans to come down and attend their first ever Hebburn Town matches.

The increased profile has meant we’ve got more in the way of column inches in the press too, but it does hang on a thread. I know that once that communication stops then the interest will halt too.

So do you think social media use has helped increase revenue by having an effect on things such as attendance and programme sales?

We’ve seen an increase in attendances and some of that has been to social media with people seeing an updated Twitter account as a sign of a professionally run football club. However I can’t claim all the credit as I’m sure attendances have also increased due to the club’s promotion to the Northern League Division 1.

We’ve also seen an increase in the number of requests for our match programmes since I started to have more involvement with it and since Nenad Mijaljević (@nenadsuperzmaj) brought a real professional look to them with his superb design work.

In your experience is social media something more non-league clubs are turning to in an effort to engage with supporters?

Every non-league club should have some social media presence but it has to be the right type. Too many clubs have an account that an individual runs but it’s effectively their personal account. There should be a clear brand tone-of-voice, a strategy and an understanding of what the club wants to achieve.

Not every club across the Northern League is at the point where they should be just yet but that isn’t their fault. Some clubs don’t have the resources and the Northern League have completely missed the point of social media. At last summer’s AGM they gave a presentation about social media and clubs were told they should just use these platforms for one-way communication.

Clubs must use these tools to connect with supporters, especially those based locally. They need to generate discussion and create a sense of pride in both the town and the team. Too many club officials live in the past and want remain in their comfort zone. Top to bottom in the Northern League this is prevalent, from the League Management Committee through the clubs.

There’s a distinct lack of real engagement. It’s little wonder that prospective supporters are being lost to the game.

Is Sunderland's statement an ill-judged piece of crisis management?