Earlier this week I published a post looking at the attitude of Newcastle United fans towards the club’s use of Twitter. The results didn’t make good reading.

The main criticisms included that the near constant stream of spammy links to the club shop made the feed unusable and there was an irritating lack of engagement with supporters. Questions went unanswered, comments ignored.

While I’m very good at it I don’t particularly like being the person who sits around criticising others without offering up some solutions, so I took a closer look at Newcastle’s Twitter problems and came up with a six ways they can improve on the status quo. Some are my own take on broad rules for social media use, others are very specific ways in which they could make immediate improvements. Let me know if you agree.

Twitter is a conversational medium. Dialogue is the name of the game and as Ross Wigham recently wrote communicators need to come up with ways of “dealing with the new world of two way conversations”. This is something that seems to have been missed by the social media team at Newcastle United who use the platform to simply broadcast information. This would be a no-no for any organisation, let alone a football club that has an eager audience who are dying to interact. It’s simple – engagement with followers will increase satisfaction and further entrench the support of the thousands of brand advocates on Twitter who fly the flag for the club.

Questions about ticket availability and prices are often asked

There are some relatively easy ways to engage these fans. I know from experience that the club is often posed questions about issues such as ticketing via social media, but little is communicated until an announcement is made on the official website. No one likes being ignored. Answering these simple questions would go a long way to improving relations with stakeholders. Even holding regular Q&A sessions so queries are concentrated during a particular period of time, which in turn would make them easier to field, would drastically improve engagement.

3. Ask more of those outside the club…

But it’s not all give, give, give. The club should take advantage of the creativity of the audience and begin to ask questions of supporters. Football fans love to share photos and videos that they believe will cement their credentials as a ‘true’ supporter. Being recognised for this dedication, either by a kind word or a simple retweet, by the very club they follow is the best type of peer recommendation. Not only are they being recognised by the one account that matters, but they’re being recommended to hundreds of thousands of other supporters.

Using Twitter as a conduit for collecting contributions from supporters regarding relatively trivial matters, such as the songs that should be on the DJs half time playlist or the design of a new kit, is another fantastic way to engender a feeling of ownership and show that their opinion has value while being extremely simple to do.

4. …And those employed by the club

Look inwards. Football clubs employ hundreds of people who work in a myriad of roles however many supporters don’t know much about what goes on day to day within the club. Why not hand control of the club account over to a different member of staff once a day every week? One week it could be the tea lady, the next it could be Yohan Cabaye? It generates a feeling of exclusivity by giving Twitter followers something fans offline will not be able to access. If an entire country can manage to do it then a football club can.

5. The right messages on the right platforms

I’m aware that all of this leaves very little time for promotion of the club shop, however I haven’t completely forgot about it. The fact of the matter is that Twitter isn’t a medium that’s particularly conducive to producing great sales leads when the plan is to spam, spam and spam some more. That’s not to say it should be avoided at all costs, but it should certainly be cut down on, particularly as there are platforms out there which would allow the club to push products while contributing to the conversation.

One such platform, and it’s one that Newcastle United have no obviously official presence on, is Pinterest. Why not, like AS Roma, put the entire contents of the club shop on there? Link images back to the club shop so supporters can quickly and easily buy any products they want. Encourage users to repin items they like with a simple competition and watch as they promote the club’s products organically.

Newcastle United will have access to a huge number of photographs locked away in the bowels of St James’ Park that supporters would love to see. Tumblr is the perfect platform to showcase and sell prints of these images as Liverpool FC found out when they launched The Reds Gallery. Newcastle are already adept users of Flickr and the sharing of these galleries on Twitter was something which was commended by respondents in my earlier survey. As many of the same principles apply with Tumblr it feels like an opportunity is being missed.

Social media should not operate within a silo. It should be part of a wider strategy and be promoted across different channels to form a cohesive digital communications plan. This same rule  can be applied to specific social media platforms, which should be put to use promoting one another and mirroring each other’s messages. 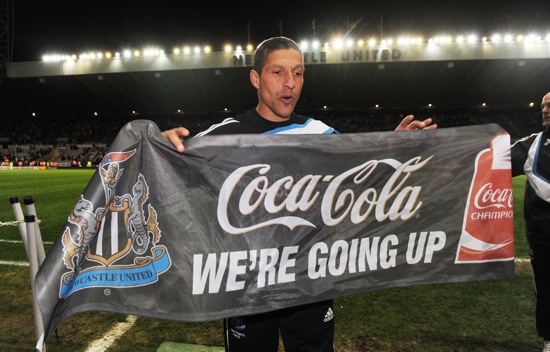 Promotion is important in more ways than one

Take, for example, the Pinterest and Tumblr accounts that’ve just been mentioned. Cross promote these profiles successfully and make the over half a million people that Newcastle United reach directly, whether that be on Twitter or Facebook, aware these channels exist and uptake will be swift. Chances are if they follow you on one platform they’re likely to do so on another. And the benefit of having multiple profiles across different accounts? Access to different audiences and the ability to deliver the same message (tailored for the platform, of course) multiple times without appearing to spam the audience.

Few brands can boast an audience like sport clubs can. In the words of We Play, “sports fans are the most influential advocates in the world”. It’s a privileged position. For club’s like Newcastle United success on social media is an open goal and a poor digicomms plan is not a valid excuse for failing to capitalise.

Newcastle United fans have their say on club's Twitter use

NUFC deserve praise for handling of Cisse vs Evans